Polygamy to be Banned in Malawi

A law seeking to ban polygamy in Malawi has left many people in the country with different reactions. In a country that has been hurt deeply by the AIDS epidemic, a call like the ban of polygamy would seem like a blessing in disguise. It has left many people divided even in women circles. Banning polygamy is viewed by some as a good thing while others condemn the thought completely.

The president of Malawi, H.E President Bingu wa Mutharika said polygamy was denying women their basic rights. Government says the move will help curb rising spread of HIV and AIDS cases. In many parts of Africa, polygamy is a choice and part of a cultural heritage. Some even embrace it in their religions and a young woman will accept to be a third or even forth wife without wincing. Sophia just turned 33 and is the third wife of a Muslim man. They live in Blantyre, Malawi and neither of them is happy about the proposed ban. Sophia says that she is happy living alongside her co-wives and together they support their husband and keep him happy.

Not every women thinks like Sophia and the feeling is not limited to a difference in class either. Aisha is also Muslim and works as a legal officer in Blantyre and she is elated about the new proposed law. She is has just gotten married and she is aware that her husband might use the fact that their religion and culture allows it to get another wife years down the road. For her, the ban is the best thing that could happen in Malawi.

The Ministry of Gender, Child Development and Community Services says that the Marriages, Divorce and Family Values bill is meant to protect women and children against “abusive polygamous husbands”. Anyone found guilty will face up to five years in prison.

The Muslim and the Ngoni communities are the most likely to be affected in the country and they consist up to one third of the country’s population. The Muslim community is upset by the proposed bill and they say that it will encroach on their rights since it is allowed in their religion. Parliament is set to meet to discuss and table the bill in Lilongwe, the Nation’s capital come May 21st. The Muslims say that they will fight against this bill if the law is passed successfully by parliament.

Ms. Patricia Kaliati, the Minister for Gender, Child Development and Community Services said the bill was intended to enhance family values, adding that it was impossible for a man to share equal love among three or four women. She said that the government had consulted widely and received the approval of all Malawians, including the grassroots and religious communities. The bill also proposes mandatory HIV testing before marriage but that does not stop widespread condemnation from many parties. The Muslim community especially has dismissed the bill as ill conceived.

Imran Shareef Mohammed who is the secretary-general for the Muslim Association of Malawi (MAM) has described the bill as discriminatory and in violation of Malawi’s constitution, which is founded on secular principles. His reason is that banning polygamy would push women into prostitution because there were many more women in the country than men. He still added and cited that Malawi was a peaceful nation and that it was dangerous to enact laws seen to be favouring other religions. Almost all churches in Malawi frown upon polygamy.

The proposal comes barely a week after the government, through the Population and Development ministry, proposed a population policy that limits the number of children at four per family. Minister Abbie Shaba urged UN agencies to support the government in its efforts to educate the public on the need to have smaller families. The UN population agency UNFPA says Malawi’s current population of 14 million was likely to triple by 2050.

Still in some African cultures, polygamy is forced upon the women. For the older women in the marriage, they look out for a capable younger woman as a co-wife to help around the house with the housework. In most cases, all parties concerned are aware of what they are getting in to. The First wife generally has a say on who the husband chooses as his second wife, and third wife and so forth. She has to approve of the woman before she is brought into the house. In modern societies though, as much as it may be part of culture, not many woman willingly embrace the incoming of a new wife. 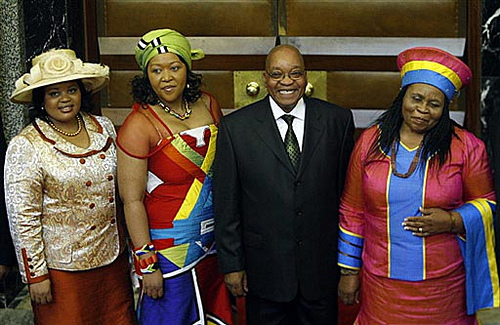 President Mutharika advises that women should be accorded their full potential and not be part and parcel of polygamous unions. Dr. Mutharika himself just tied the knot to his party member Callista Chimombo. He lost his first wife to cancer.

Chikondi, a fashion designer in Lilongwe backs her president. She is married with three children and she says that if her husband so much as talked about getting a new wife, she would pack her bags along with her children and walk out of her marriage without a fight.

While some women and men embrace polygamy, there are some like Chikondi who will support the ban full blast. If the ban is in effect after May 21st, hopefully polygamy will not be as widespread…in Malawi at least.

Women coming from under the knife as Uganda outlaws female circumcision