Model of the Week: Aminata Niaria

MODEL OF THE WEEK: AMINATA NIARIA

AMINATA NIARIA is a Senegalese beauty signed to powerhouse IMG.  In 2006 Aminata was discovered by Lanvin’s own Alber Elbaz.  Paris was where she was perfected as a model.  After debuting at the Lanvin show in Paris, her resume had no choice but to grow significantly as a model.  Let’s just list some of her credentials…a French Glamour editorial, a Harper’s Bazaar editorial both in September 2007 and 2008, a Dazed & Confused Magazine editorial, a Vogue Germany editorial, an i-D Magazine editorial, a Vogue Italia editorial, and a Vogue Russia editorial in November 2007 and in the current issue of July 2010.  Can it get any better than this? 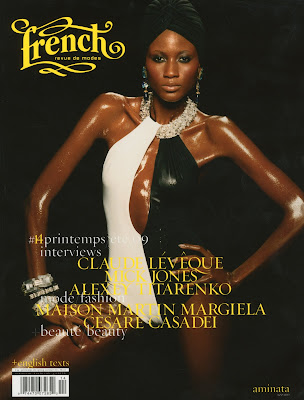 That’s just the magazines, Aminata has walked in the highly coveted Victoria’s Secret fashion show in 2009 and for designers Christian Lacroix, Isaac Mizrahi, Oscar de la Renta, Vera Wang, Fendi, Karl Lagerfeld, Proenza Schouler, Vivienne Westwood, and Ralph Lauren in Paris, London, Milan, and New York.  She is living the ultimate model dream.  Having a shoot with Steven Miesel solidifies her supermodel status.  I could go on and on detailing her fabulous modeling experiences, but this would turn into an essay.  Aminata proves that a strong look and determination will open numerous doors in this competitive industry of modeling. Model of the Week: Wakeema Hollis