Have you ever wo 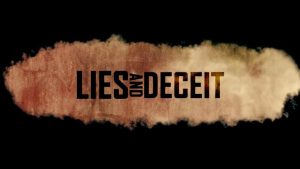 nder what make a person tell lies? what causes a person to become deceitful? and last what is the reason for a persons betrayal?

Betrayal, Lies and deceitfulness is traits of a coward, weak and manipulative person. To have some one experience a person like that in their life can either be very disappointing or devastating to the point that lack of respect and trust has no regards or retribution on behalf of the persons betrayal.

A person that tells a web of lies whether it be for the moment or on a continuous base has no truth in them and most of the time would eventually be identified as one of the  following types of liars: a pathlogical liar, a sociopathic liars, habitual liar, occasional liar, and last a white liar.

These types of liars lack the integrity of honesty and truth and will go the extra miles to make their lie appear realistic and truthful when in fact it is the direct opposite of the actual truth of the matter; however these types of people may sometimes exaggerate, become delusional and overly dramatic. A liar will always get caught some how or some way at some point and will never admit the wrong in which they have done or said. A liar will always feel the need to manipulate, fool or outsmart the intelligence of a naïve person(s) that is under the influence of their own lies and is usually motivated by not getting caught up into their own lies. A liar has no regards and no real integrity as a person or for anyone and is usually fueled by a false ego and pride. A liar will always be a liar don’t matter what the circumstance is; either you are living a lie, telling a lie, or spreading a lie— all is the same thing and has no volatility or quality about a liar.

A deceitful person always hide behind the mask of a “Wolf in sheep’s clothing” when presenting themselves as an innocent person….. when in fact they have a ruthless agenda to either manipulate, control, or hurt a person. These types of people are usually phony, fake, and natural con artist. They are not to be trusted under no conditions but ends up enticing the vulnerable under their negative influence. HINT— The best way to spot a deceptive person is let time reveal the true nature of that person.

Don’t ever allow yourself to be fooled by the  “Big Bad wolf in a meek sheep’s clothing”. A deceitful person is usually weak and unidentified, they can only function under the mask of different faces that will present themselves as such to deceive their audience or person in general. They usually have hidden agendas and ulterior motives to willfully deceive a person to either get what they want, to control the circumstance of a situation, or to falsely appear as someone that they are not. It is only a matter of time that the true colors of a deceitful person will show fourth and manifest itself. If you are a patient enough and carefully observant  as a person to discern a deceptive person. You will be able to give them the benefit or doubt and save yourself from being shallow, blind sighted, trapped or tricked by the false image and misleading agenda of a deceitful person.

If you practice the quality of paying attention to the details in the big picture and not just the picture alone, you will never go wrong at discovering the truth in the details and overlooking the painting of a lies.

It stings like a bee but hurt like an open wound…….. I know that we have all been betrayed by someone or something in our life. Betrayal has caused the most beautiful and innocent people to lack the stablity of trust in others.

Therefore, it has allowed us to be either angry, indifferent, cautious, calculating  and distrustful of others that mean us well and no harm, but is still chastised by the person distrustful ways which in return causes the other person to suffer at the expense and behavior of the person that chooses to be distrustful and distant. That person usually end up paying for the mistakes of the previous person that has hurt the one that has been betrayed— which is often times not fair for anyone developing a relationship with someone that has been betrayed in the past.It robs the person that is distrustful of others in learning, healing and recovering from past hurts of betrayal and developing healthy relationships with others.

Most of the time people that ends up betraying someone has no loyalty or respect for themselves or  anything. They lack the ability of being committed to anything or to anyone that they feel is weak to them, which is in fact a reflection of the lack of acceptance and quality they lack within themselves that has no value and most of time go around hurting, stepping on toes, belittling, and defaming people that they either wish they could be or control. If it is in a person to stab you in the back and betray you they will do it at no mercy— that is why it is only right to stand guard of mutual respect when meeting people and not allowing them to get close to you in ways that they can get an opportunity to cross you or disrespect you due to the harboring of dislike, jealousy, and envy that the person has either developed over time in knowing you out of familiarity or simply because they don’t like you for no reason at all.

Stay away from or be cautious of people that are either flaky, distrustful with cause and reason, insulting, deceitful, dishonest, bashing and participants of shameful acts.